Hopes of finding four crew members of a Maersk Line cargo vessel that caught on fire  in Arabian Sea early this week are fading, the shipping company has said in a statement published on its website.

The missing crew members, one a South African, were among 27 others sailing with the cargo vessel from Singapore towards the Suez on Tuesday, when a cargo handling bay caught on fire with the vessel located approximately 900 nautical miles southeast of Salalah in Oman.

According to Maersk in statements this week, 23 of the crew members were soon evacuated after the fire went out of control, but that sadly, one of these sailors – since confirmed as a Thai national – succumbed to his injuries and died while two others who received serious injuries were receiving medical care.

The rest of the crew, 19 in total were being transported to India for further medical attention.

Meanwhile, the four other crew members now confirmed as one South African, one Indian and (2) Phillipino were still missing and that hopes of finding them were dim.

Four crew members remain missing despite comprehensive search efforts as a response to the fire that broke out aboard Maersk Honam on Tuesday, 6 March.

“While search operation continues the hope of finding our missing colleagues is fading. We are in contact with their families and they know that tragically, the time passed decreases the likelihood of finding their loved ones alive. Our thoughts and prayers go to them,” says Søren Toft, Chief Operating Officer of A.P. Moller – Maersk.

The nationalities of the four missing crew members are: two Filipinos, One South African and one Indian. All male.

23 crew members were evacuated by the vessel ALS Ceres after the fire broke out. One is reported dead due to injuries sustained in connection with the fire. Furthermore, two crew members, one Thai and one Filipino, were in urgent need of medical care as their conditions worsened. They have been evacuated by an Indian navy vessel and handed over to the Indian coast guard of Trivandrum and are now receiving medical treatment. They are accompanied by one of the evacuated Indian colleagues with local language skills.

The remaining 19 crew members onboard ALS Ceres are en route to Cochin, South West India, where medical professionals and crisis psychologists have been arranged for.

“We are doing our outmost to care for and closely follow the conditions of all evacuated colleagues. Also, we have an ongoing contact with their closest relatives”, Søren Toft says.

Maersk Line will continue to provide updates on the situation.

On Thursday, the South African Maritime Safety Authority (SAMSA) confirmed that it was aware of and monitoring the situation closely, and that it was in constant contact with Maersk Line officials. 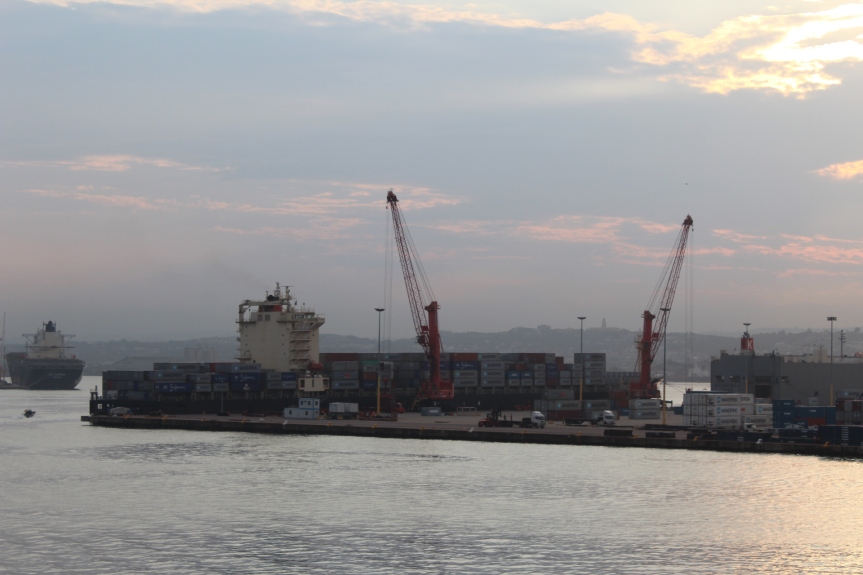 The South African Maritime Safety Authority (SAMSA) says it has noted reports concerning an outbreak of a fire on board a Maersk owned cargo vessel, the Maersk Honam, off the Arabian Sea in the Middle East and in which incident a South African seafarer is confirmed to be involved. 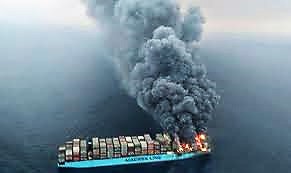 In a brief statement on Thursday, SAMSA said reports of the incident indicated that a South African seafarer who was part of the vessel’s crew was among those reported to have gone missing during an evacuation. At least one of the missing was reported dead.

“SAMSA is aware of the situation and is in contact with the company (Maersk) regarding the incident,” the agency said.

According to the shipping company in a media statement released on Thursday , one of its vessels, the Maersk Honam with 27 crew members on board, reported a serious fire in one of its cargo holds.

The fire reportedly broke out on the vessel on Tuesday while it was sailing from Singapore towards the Suez, in an ocean area approximately 900 nautical miles southeast of Salalah in Oman.

At the time of the incident the Singapore registered vessel built only last year (2017) with a nominal capacity of 15 262 TEU (twenty-foot equivalent unit), was carrying 7 860 containers. 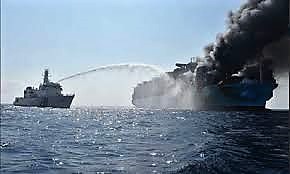 According to Maersk after initial efforts by the crew to put out the fire and failed, the crew called for assistance and were soon evacuated with the assistance of another vessel nearby, the ALS Ceres. However, four of the 23 crew members were reportedly missing and efforts were continuing to try and find them from the burning vessel.

A.P Moller-Maersk Chief Operating Officer and Member of the Executive Board, Mr Søren Toft said: “After being unsuccessful in their firefighting efforts, the crew sent out a distress signal and a total of 23 crew members were safely evacuated to the nearby vessel ALS Ceres, which arrived at the scene around 18:30 GMT (on Tuesday).

As of Thursday, Mr Toft said the 22 crew members rescued were on their way to Sri Lanka on board the vessel ALS Ceres. According to Mr Toft, the cause of the fire was currently unknown.

“Regrettably,” he said: “four crew members remain missing and one was reported dead.

“We’ve received the news of Maersk Honam and the four missing crew members with the deepest regret and are now doing our outmost to continue the ongoing search and rescue operations. This by rerouting our own vessels, with assistance of vessels in the area – most notably ALS Ceres that thankfully acted promptly upon our distress call – and the local authorities.”

Mr Toren added that a search and rescue mission was ongoing and that the container vessels MSC Lauren, Edith Mærsk and Gerd Mærsk – all in vicinity – had diverted their routes and were approaching the area with expected arrivals in the early morning on Wednesday.

He reported weather conditions in the area as having been currently fair.

“Maersk Line is in the process of informing the relatives of all crew members and acknowledge this is a very difficult time for them. The evacuated crew is obviously distressed, with two crew members currently receiving medical first aid onboard the ALS Ceres. We will offer crisis counselling for the seafarers signing-off and returning to their families and our thoughts and deepest empathy go out to the families of the crew members that are still unaccounted for. We will offer them all the support we can in this very difficult situation,” said MrToft.

According to Mr Toft, Maersk Line will investigate the matter thoroughly in cooperation with all relevant authorities.