The South African Maritime Safety Authority (SAMSA) is not apologetic about the approach of its contribution to economic development in the Eastern Cape insofar as it is consistent with its legislated mandate to, among other things; promote South Africa’s maritime economic interests.

This is according to the agency’s acting CEO, Mr Sobantu Tilayi in response to mounting criticism levelled against the agency with regards to its role in the attraction of investment into  bunkering services now operational in the coastal city of Port Elizabeth in Nelson Mandela Bay, Eastern Cape, as well as its rural maritime economic development projects involving the basic skilling and recruitment of rural coastal youths into cruise tourism globally.

The latter initiative which has seen more than 300 youths trained and found employment in MSC cruise vessels across the world was launched in the province in 2017 with the financial backing of the Office of the Premier, Eastern Cape, and technical and administrative support by Harambe.

It was initiated in Gauteng in 2016 with the support of Gauteng provincial government and is open to all provinces keen on it.

The bunkering services – essentially an international fuel services station established in the port of Port Elizabeth ocean precinct at the initiation of SAMSA – also began operations in 2016.

In response during a formal function to mark the registration of a fifth vessel under the South African flag in the port of Port Elizabeth a week ago, Mr Tilayi said the introduction of the bunkering services in the city had been undertaken following careful assessment of its suitability for the international service to trade cargo vessels passing along the southern oceans of Africa.

In addition, he said SAMSA was the country’s agency tasked with prevention of pollution by ships along the country’s three oceans, and also responsible for ensuring the safety of people and property at sea. Therefore, it was incumbent upon SAMSA to make sure there was no environmental threat of the seas by the bunkering services. 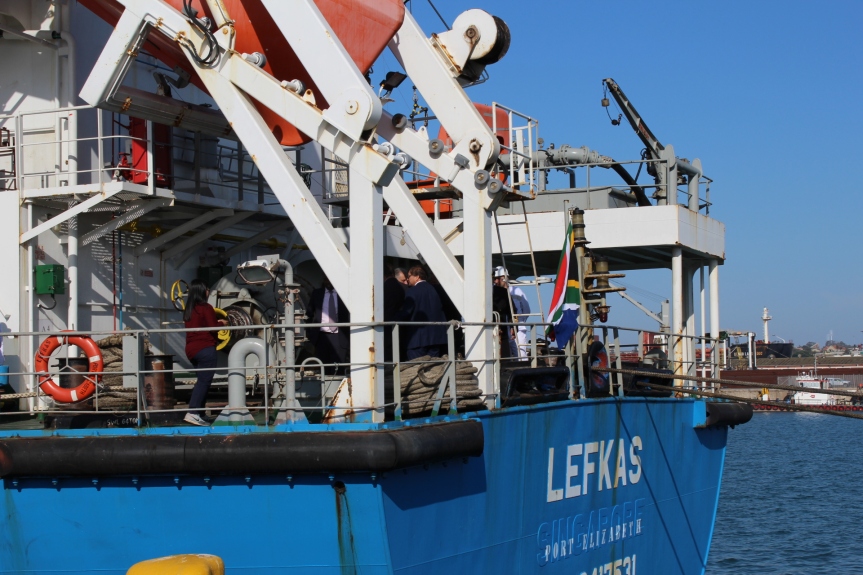 Working jointly and closely with the Department of Environmental Affairs, SAMSA had ensured that no danger would be posed by the bunkering services in the Port Elizabeth coastal region beyond pure accidents and which, if experienced, would be managed according to approved safeguard processes already in place.

However, consistent with both SAMSA’s mandate as well as objectives of the Operations Phakisa (Oceans Economy) initiative launched in 2014, crucially, a major consideration was that the investment into the bunkering services was a necessary economic intervention for especially the region of the Eastern Cape province that had historically been ignored by previous government policies and initiatives.

He said contrary to claims by critics, the bunkering services had yielded positive results as it had to date generated sizeable financial income for the Nelson Mandela Bay region running into millions of rand and created employment for about 300-500 people directly and in downstream businesses.

According to Mr Tilayi, the targeting of rural coastal areas of the Eastern Cape for these services as opposite to hinterland areas, was deliberate and informed by a defined need to ensure direct participation and beneficiation of the communities closest to the oceans on oceans economy development that was right at their own doorstep.

“It is a great pity, and regrettable that some in the Eastern Cape are finding reasons to look down on and denounce our efforts. But we are not apologetic about our approach to contribution to development of the region and frankly, we would prefer partnerships and collaboration to ensure that people of this region participate and benefit.

“But we are grateful and encouraged that many others in this region, including especially the Eastern Cape provincial government, are giving full support to our endeavours”

For Mr Tilayi’s full remarks on the issues, click on the video below.