The fate of six stranded Asian sailors found in a desperate situation in a poorly conditioned vessel off the port of Cape Town recently may remain uncertain still, but their safety and general well-being going forward is ensured for time being, thanks to the timely intervention and assistance efforts of the South African Maritime Safety Authority (SAMSA).

According to the agency, part of whose mandate is to ensure the safety of property and life at sea, the epic drama involving the six foreign sailors – two from Taiwan and four others from Mynmar, and some of whom now face possible legal sanction – apparently unfolded after SAMSA officials were alerted by the Transnet National Ports Authority (TNPA) and the Department of Environment, Fisheries and Forestry (DEFF) about a drifting, fuel-less and permit-less vessel spotted at sea, off the port of Cape Town on 02 December 2019. 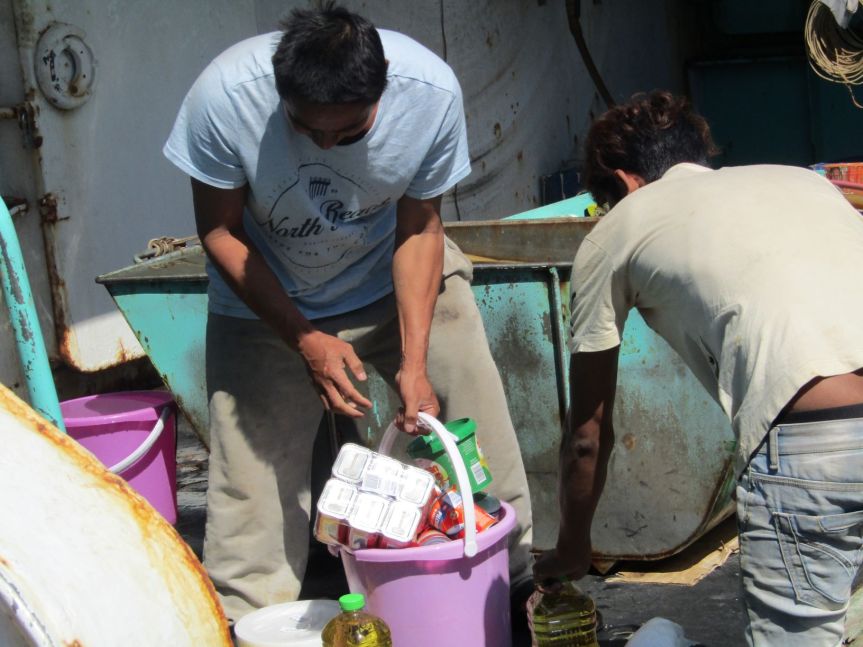 Four of the six member crew of the Yong Qing Fa No.666 currently believed to have been abandoned by their employer and who are currently residing on board the crippled vessel at the port of Cape Town after it was detained following its unauthorized entry and anchorage in SA waters, and a subsequent C188 inspection that found it not seaworthy. The six member crew of the vessel consists of four seafarers from Mynmar and two others from Taiwan.

Captain Pierre Schutz, a deputy Principal Officer at SAMSA’s western region Cape Town office, recounted this week about how the agency’s officers scrambled to the rescue of the foreign seafarers to ensure primarily their safety and general welfare while their sea sailing troubles including legal issues were being interrogated for a possible resolution.

The legal woes facing both the owners and crew of the now quarantined fishing vessel known as the Yong Qing Fa No.666 but whose flag state has yet to be determined, it emerged, include the vessel’s unauthorized entry into South African sea waters, the absence on board of necessary documentation including certificates of nationality, tonnage, drawing plans, crew list, Voyage Management System (VMS) transmitting, and an off Automatic Identification System (AIS).

On entering South African waters without permission and dropping anchor near Cape Town harbor without authorization on 30 November 2019 due to apparent desperation for bunkers, the six member crew on board reportedly also initially failed to communicate properly their plight with local authorities due to language difficulties, until the Taiwanese Fisheries agency in South Africa got involved, almost a week later. 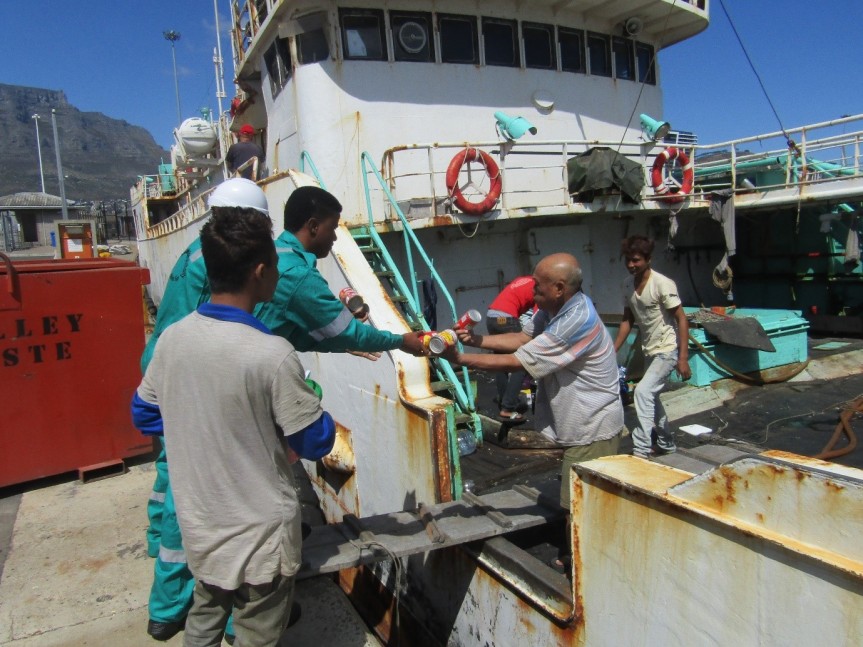 In fact, on entering the country’s waters in the Atlantic Ocean and putting anchor near the Cape Town port, according to SAMSA, based on TNPA reports, the vessel’s crew did so without following any protocols and had maintained complete radio silence, something unusual and illegal.

It had since emerged that the six crew members and their poorly maintained vessel had were likely abandoned by the owner, with four of the crew members having not been paid their wages.

According to SAMSA on Wednesday this week, two of the stranded seafarers, from Taiwan, had since been charged with certain law transgressions (unspecified) and were due to reappear in a Cape Town magistrate’s court on 27 January 2020.

Reporting about the drama, Capt. Schutz says SAMSA got drawn initially to the plight of the crew of the vessel – and which had since been established to have been sailing from West Africa to Mauritius – after respective authorities including the TNPA, DEFF and others, all bound by relevant legislation and protocols, were initially reluctant and refused it entry into a South African port without standard procedures having been fully observed.

These included a 21 day offshore containment period to determine the vessel and crew health condition that it did not carry any communicable diseases such as – in this case – Ebola, as the vessel had reportedly sailed from a West African region where the deadly disease is reputably rife. 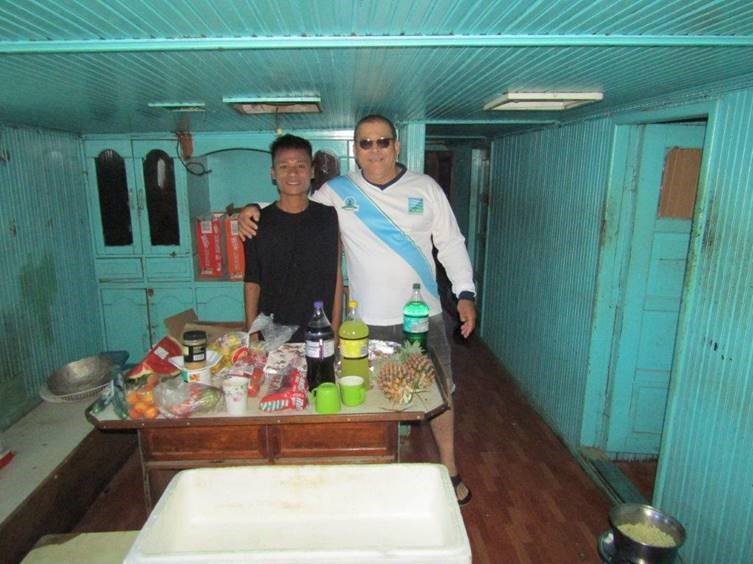 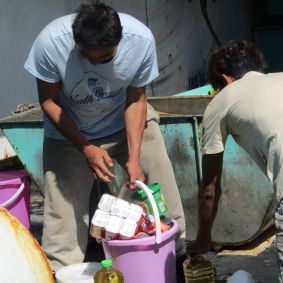 He says 12 days after the drama ensued, with engagements ongoing among respective authorities, SAMSA appealed to the TNPA, DEFF and others to allow an inspection of the vessel and crew in order to facilitate provision of basic essentials to the crew, such as food and water. Crucially, this was also to ensure the safety of the vessel given its unauthorized anchorage which could prove hazardous to other sailing vessels in the vicinity if left unattended for too long.

By 13 December 2019, according to Capt. Schutz, the vessel was eventually allocated a berth in an isolated area at the port of Cape Town following to which nutrition was brought on board for the vessels’ crew while a variety of inspections were conducted.

He confirmed that a SAMSA inspection in terms of local and international legal instruments including the International Labour Organisation’s (ILO) C188 – Work in Fishing Convention, 2007 (No. 188) found the vessel to be not seaworthy and it was officially detained, while a DEFF inspection led to the arrest of the vessel’s skipper and his subsequent appearances in court.

As of last week, according to Capt. Schutz, the vessel still had no power and it still had no local agent appointed to attend to its needs as required by law. Meanwhile Taiwanese authorities in South Africa were still not taking responsibility for a majority of the crew members on board the vessel while DEFF officials’ efforts to seek assistance from the Department of International Relations and Cooperation (Dirco) had proved fruitless so far.

Regarding the detention of the vessel, Capt. Schutz says its release will be conditional to the owners carrying out the repairs it is so advised to do and on completion, inform SAMSA.

“Once so advised, SAMSA would conduct another inspection, and if the vessel is found in good condition, the vessel would be released from detention. There is no time frame attached to this,” he says, save for a range of port charges it will incur, accruing to the TNPA, for its safekeeping at a South African port, and which could escalate depending on how long it takes to repair it.

Capt. Schutz says further that the vessels’ crew will be repatriated  once all matters related are finalized to the satisfaction of South African authorities.

“The responsibility however lies with the owners. There has been no final decision in this regard,” he says.

Please note that this story has been updated to provide additional details and correct certain inaccuracies.