Port authorities at the port of Cape Town, working closely with the city’s firefighting services team, have managed to keep under control a raging fire that broke out on board a Korea fishing vessel, the No.101 Geumjeong on Saturday morning, the South African Maritime Safety Authority (SAMSA) reported Sunday. 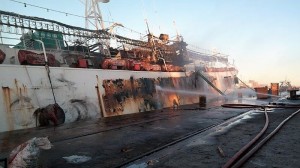 “The fire is under control, but has spread to the back (aft) of the vessel. The City of Cape Town Fire Services are rendering boundary cooling from the quay side and a TNPA tug from the waterside. The vessel is still listing to port and is trimmed by the stern, limiting firefighting capabilities on board,” said SAMSA acting Principal Officer for Cape Town, Captain Antoinette Keller.

According to Capt. Keller, the incident also has had no impact on shipping and posed no pollution risk currently even as pollution equipment was kept on standby should deployment become necessary.

Capt. Keller said local authorities were alerted to the fire on board the No.101 Geumjeong at about 1.20am Saturday, prompting the City of Cape Town Fire Department to race to the scene – a repair quay at the port of Cape Town – where they were joined by Transnet National Ports Authority (TNPA) crews.

“There is no reported loss of life and all individuals are accounted for. Currently there is no personnel on board and the fire is being addressed via boundary cooling for safety reasons, both from shore side and sea side. The vessels in the immediate vicinity have been safely moved to alternate berths,” she said.

According to Capt. Keller, an investigation will be conducted by SAMSA into the cause of the fire as soon as it has been put out.

Meanwhile in Port Elizabeth, where a cargo vessel had to make an emergency docking earlier in the week after it also caught on fire while sailing towards the Cape Peninsula, mopping up operations continued following to successful evacuation and dousing out of the fire.

“Mop-up operations and discharge of damaged containers are in progress, and causalty/incident investigation is in progress,” confirmed Captain Daron Burgess.