With about 11000 seafarers now in its name, the country is steadily making progress towards maritime economic sector skills development and thereby creating opportunities  for all.

South Africa’s passionate yet purposeful campaign to enhance greater public awareness towards realization of the relevance and importance of the country’s status as fundamentally a maritime region, and whose global trade is almost completely dependent on the seas around it, continued in Durban at the weekend, with a national event to celebrate the International Day of the Seafarer. 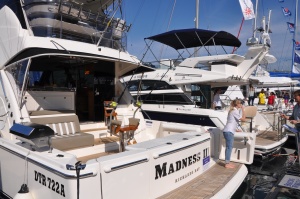 Situated appropriately within the annual Durban International Boat Show and Exhibition held at the Royal Natal Yacht Club, the International Maritime Organization (IMO) driven annual event, hosted in South Africa by the South African Maritime Safety Authority (SAMSA); drew attention to the country’s 11 000-strong cadre of seafarers and which is steadily growing to take advantage of the numerous opportunities presented by the country’s vast ocean economy.

Over the past decade, SAMSA working closely with a variety of partners both within the private and public sectors, has played an instrumental, if pivotal role as a State organ to drive hard, deliberately and purposefully, a human skills development campaign for the South African maritime economic with much emphasis initially on cadet training, leading to its acquisition and management of the country’s first dedicated cadet training vessel, the SA Agulhas, in 2011. 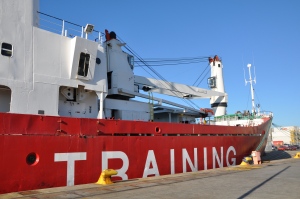 As of Saturday, 25 June 2016; there were on record about 11 000 seafarers in South Africa, plying their trade both locally and abroad and with their US dollar denominated income earnings making a contribution to the country’s gross domestic product.

The International Day of the Seafarer, is a global event which according to SAMSA’s Centre for Corporate Affairs was first celebrated in 2011, following its establishment by a resolution adopted by the Conference of Parties to the International Convention on Standards of Training, Certification and Watch keeping for Seafarers (STCW), 1978, held in Manila, Philippines, in June 2010, which adopted major revisions to the STCW Convention and Code.

The Day of the Seafarer had since been included in the annual list of United Nations Observances.

This year’s theme for the Day of the Seafarer was #AtSeaForAll a notion, according to the centre, that  had a clear link with the 2016 World Maritime Day theme, “Shipping: indispensable to the world”, emphasizing that seafarers serve at sea not just for the shipping industry or for their own career purposes but for all of society, hence they are “indispensable to the world”.

In a statement in Sweden on Friday, IMO Secretary-General, Mr Kitack Lim described the global seafarer celebration on Saturday as an opportunity for communities across sectors to “reflect on how much we all rely on seafarers for most of the things we take for granted in our everyday lives.

He said: “Over one million seafarers operate the global fleet yet billions of people depend on them for the essentials and the luxuries of life. Shipping is essential to the world – and so are seafarers.

“So, this year, on 25 June, the Day of the Seafarer, we are once again asking people everywhere to show their appreciation for the seafarers that quietly, mostly unnoticed, keep the wheels of the world in motion.”

In Durban on Saturday, SAMSA Acting Chief Executive Officer, Mr Sobantu Tilayi echoed the sentiment, emphasizing the crucial role of South Africa within the world’s maritime economic sector, and the importance of skills development within it, but also the need for recognition and appreciation of contributors to the growth of the domestic maritime sector.

Of seafarers, Mr Tilayi – who had alongside him Captain Thembela Tobashe – one of the first of three black females ever to qualify as Master Mariners – echoed the IMO view, stating: “At the coal face of driving economies around the world and at the forefront supporting international trade the seafarers, whether deck hands, captains of ships, engineers and cadets, galley staff play a very significant role in ensuring the world’s economic growth and sustainability. 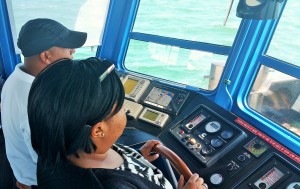 “Seafarers are those brave hearts who risk their lives, give up months of family time and being on land, to go out to sea, to not only support and protect our beloved country and their nations, but also to create an impact on each and every citizen by ensuring international trade, which affects us all. They make sure that the environment is protected, trade is flowing and our communities are able to thrive and develop themselves. It is therefore essential to raise our hands in salutation to these fearless men and women,” said Tilayi.

Mr Tilayi encouraged particularly youth to explore at depth the skills and economic benefits their involvement in the sector might provide them.

For a select group of photos of the Durban International Boat Show and Exhibition, please Click Here