A stop-over in Haiphong City, Vietnam by Deputy President Cyril Ramaphosa and his government delegation a week ago brought about much joy and celebration for a group of South African tertiary level maritime education students resident in the country.

The visit and meeting with the group of four students at the Vietnam Maritime University and International School of Education – Sendra Kentse Matshira, Mpumelelo Ndebele, Mandisa Mthembu and Cyril Makukula – reportedly occurred at Mr Ramaphosa’s request during his visit of the East Asian region, including Singapore.

On Tuesday 04 October, accompanied by among others Deputy Minister of Defence and Military Veterans, Mr Kebby Maphatsoe and Deputy Minister of Agriculture, Forestry and Fisheries, Mr Bheki Cele; Mr Ramaphosa invited the four students for a lunch meeting and they duly obliged, with much excitement. 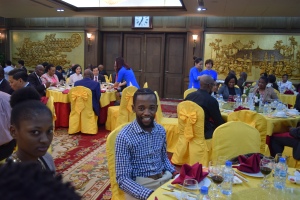 After the most appreciated lunch meeting, Mr Ramaphosa on a brief tour guided by Vietnamese foreign ministry directorate official, Mr Nguyen Trung Kien; tagged the group along to the Haiphong City harbour where Vietnam’s reputedly biggest shipyard, Vinashin is located. It turned out to be yet another photo shooting opportunity for the four students.

Recounting the experience shortly thereafter they described it as a great honour to have the opportunity to meet and interact with Mr Ramaphosa and his delegation.

“We were honored with an invitation to have lunch with Deputy President of South Africa and his delegation. The meeting took place at a government building in Haiphong city where our university is also located

“Firstly, when we arrived at the venue we were called in by his delegate and then we went to his

table to greet him. The basic questions he asked included: “What’s your name, Where (in South Africa) are you from?….. ” and then, after that we greeted his delegation with some asking us about the courses we are doing and requirements to study this course.

“Secondly, he wanted to take photos with us – one by one and then in a group.. Mr Kebby Maphatsoe the Deputy Minister of Defence Force and Military Veterans of South Africa was very happy about us. He even encouraged us to study hard because he believes we are the future solution of our country.

“He told us he would be glad to assist with anything when we get back home. He also took photos with us. At the end of it, it was a good day. We had fun and it gave us hope that we have a bright future ahead and all we have to do is to work hard at school.” related the group afterwards.

Working hard at their studies, they are – according to their latest academic results report since joining the Vietnamese maritime university a year ago.

Vietnam Maritime University, currently with about 17,000 students engaged in various study courses provided in 35 undergraduate subjects is a long established institution dating back to 1956. It is one of 17 key universities of Vietnam as well as the largest school in the Vietnamese transportation sector.

However, the scholarship only covers all the tuition fees and university‘s hostel accommodation (if required), but excludes subsistence allowances and return international airfares.

The SA Maritime Safety Authority (SAMSA) – a government institution at the forefront of facilitating among other issues, the expansion of education, training and skills development for South Africa’s maritime economic sector – covers the extra costs excluded in the grant for three of the four students.

Provided copies of their academic progress to date show that all four are coping relatively well, with all of them notching an average B to B+ (76-80: 81-84) score marks per semester, in a range of subjects inclusive of Mathematics, Micro and Macro-economics, Oceans Politics, International Law and Relations, Global Logistics, Economic Geography, to Politics of Pacific Asia, International b+Business and Globalization.

The group is expected to complete its junior degree studies in another two to three years.