Organizations involved in the rescue of dozens of penguins caught up in an oil spill along the Indian Ocean coast near Port Elizabeth in the Eastern Cape these last few weeks may be in line to recover some or all of the costs of the operation, according to the South African Maritime Safety Authority (SAMSA).

According to SAMSA Centre for Shipping’s executive head Captain Nigel Campbell this week, a Panama registered Turkish owned vessel found to have been responsible for the disastrous oil spill near Port Elizabeth three weeks ago had been issued with an Admission of Contravention amounting to a total R502 000, in addition to a R1-million provided by the vessel’s insurers for purposes of reimbursing people and or organizations involved in the rescue and clean-up of the sea birds.

More than a hundred penguins inhabiting a small island known as Jahleel near the Ngqurha deep water port some 30 kilometers north east of Port Elizabeth (a.k.a Mandela Bay), were affected by the oil spillage and it took a number of rescue organizations to collect them for cleaning and rehabilitation.

Captain Campbell, in a statement responding to concerns expressed by a senior official of the Wildlife and Environmental Society of South Africa (WESSA) through a local Port Elizabeth daily newspaper this week, said SAMSA had responded immediately to two oil spillages that occurred in the vicinity.

The first spillage involved an accidental discharge of oil from a vessel loading bunkers and which sparked a concern at WESSA.

However, Captain Campbell to sought allay fears that the recently established shipping vessels’ bunkering service at the port of Port Elizabeth might prove problematic, indicating that the accidental spillage during the bunkering had been quickly cleaned up and was therefore not believed to have affected negatively the environment, but specifically wildlife.

Captain Campbell said: “The spill from the refuelling operation was approximately 100 litres and was cleaned up immediately. Although we are still awaiting the outcome of the testing of samples taken SAMSA strongly believes that this was not the source of the oil on the penguins.

“Some two days after this spill a large oil slick was found in the bay and additional slicks were noted further down the coast as far as Jeffrey’s Bay. Our investigation identified a vessel on passage to Cape Town that had pumped oily waste into the sea over a stretch of approximately 120 nautical miles through a faulty oily water separator. 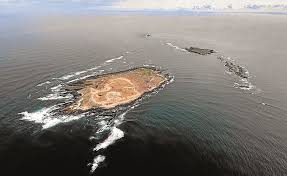 “The Turkish owned, Panamanian registered bulk carrier was subsequently detained in Cape Town as being unseaworthy. It was issued with an Admission of Contravention of R127 000 for this as well as an additional R375 000 for illegal discharge of oily waste.

“Furthermore the owners, through their insurers were required to lodge an undertaking of R1million to reimburse those parties that reacted to the spill, this would include the cleaning of penguins. The ship was only released from detention when all monies had been deposited,” said Captain Campbell.

“The monies received are deposited into the Maritime Fund which is managed by SAMSA but is controlled by the Minister of Transport.

“In terms of the SAMSA Act, an application to the Minister can be made only for the purpose of furthering the objectives of the Authority (SAMSA) and in this case, this would be ‘to prevent and combat pollution of the marine environment by ships’. The rehabilitation of wildlife would therefore be considered,” he said.

Meanwhile, WESSA chairman of the Algoa Bay (Port Elizabeth) branch, Ms Martheanne Finnemore in her letter published in The Herald; praised both SAMSA as well as the several organizations that responded quickly and decisively in alleviating the plight of the wild sea birds affected by the oil slick.

She said: “Well done SAMSA for imposing a fine of R350 000 on the ship that caused the spillage during the oil transfer. This money should be channelled to those voluntary organizations such as SAMREC (South African Marine Rehabilitation and Education Centre) and to SANCCOB (Southern African Foundation for the Conservation of Coastal Birds) and its facility at Cape St Francis Bay to enable them to continue doing their amazing work in rescuing and rehabilitating these iconic birds.”
End