South Africa’s maritime sector education, training and skills development continues to draw support from a growing network of contributors as efforts gain traction towards transformation and integration of the sector into the country’s mainstream economy.

The three youths are Siyamtanda Vuyelwa and Phaphama Kepu – both from the Eastern Cape, and Gershwyn Poole from the Western Cape.

Subtech SA, a sub-Saharan region marine industry services group based in Durban, said it readily offered to support the youths after establishing their high level of interest in maritime studies.

“What binds these three kids and Subtech is a passion for all things maritime! We look forward to monitoring their progress over 2016 and wish them well for their Matric Year,’ said the company in a statement. It said the bursaries would cover both school and hostel fees, allowing the enthusiastic group of youths to continue with their maritime studies.

Subtech SA described Lawhill’s maritime studies programme – featuring maritime economics and nautical sciences – as being “one of only a very few examples of a specific industry playing a role, at secondary school level, in providing industry-focused education which improves the school leaver’s chances of finding employment.”

“The programme,” said Subtech SA: “is aimed at stimulating maritime awareness among young people, attracting them to the shipping industry and providing the industry with high quality, skilled and knowledgeable employees.

“Because the Lawhill Maritime Centre receives no state funding, its students – the majority of whom come from financially-stressed homes – are reliant on bursaries provided by the maritime and related industries to fund their education from Grade 10 to 12.”

SAMSA, encouraging and collaborating closely with a range of stakeholders across public and private sectors in promoting maritime sector education, training and skills development as a core competence to the sector’s growth and transformation, has since 2013 supported as many as 65 foundational level pupils from across the country keen on pursuing maritime studies at the Simons Town education institution, inclusive of a total 16 pupils currently, involving an investment for the period of just over half-a-million rand.

*Meanwhile, scores of pupils at the Eastern Cape’s first and newest maritime high schools in East London continue to get support and exposure from the country’s maritime sector with a view to enhancing their interest and knowledge of the sector. 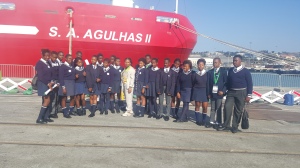 This past weekend, the pupils from George Randall and Ngwenyathi High Schools, were bused to Port Elizabeth for a day and taken onboard the country’s research vessel, the SA Agulhas II shortly after its return from a research expedition in the Antarctica region.

A month ago, pupils from the schools were among guests of President Jacob Zuma during his delivery of his annual report on Operation Phakisa, also in Port Elizabeth.